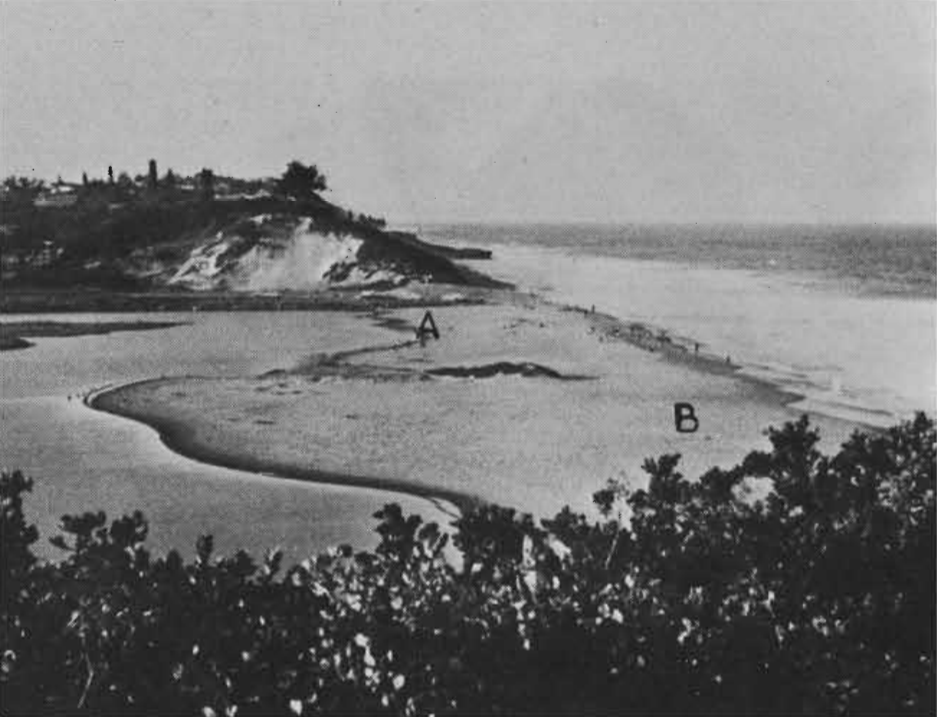 Reference: From technical paper by L.M. Juckes titled “A bone-bearing beachrock at Umbogintwini Natal”.
The picture is a view of the lagoon and beach bar as viewed from “Windy Corner” to Pingo Beach.

The Twini River lagoon and beach also holds many memories. This is another feature which has been wiped out of history due to the redirection of the river out to sea via a canal on the Pingo side –  the aerial photo indicates that this is now just an elongated dry patch. In my time this was a long narrow brackish lagoon where the river water built up to a point where the beach bar was breached and the river flowed into a small ocean bay between submerged rock shelves. The wave action then rebuilt the beach bar, with the back lagoon being a good spot for fishing. Access to the beach was originally via a steep narrow walkway along the southern side before an access track was constructed for vehicle access from the car park to the beach. Mullet, tiger fish, gobies and other small fish could always be caught. The main interest however was the rock salmon and other larger fish. On one occasion my friend Terry from the ‘New Village’ and I rode down to the lagoon on our bikes with rods. Hudd Road and Linscott Road was our usual route to Golf Course Road and then to the lagoon. Terry caught a 6 pound rock salmon which gave a huge fight. That however turned out to be the easy part, taking the fish back home with our old three speed bikes, rods and tackle, especially up the steep part of Linscott Road, was the difficult part. On another occasion my Dad caught a large queenfish using one of the lures that he made. On another occasion we also had three Kens in our fishing trip to the lagoon, so for communications purposes the eldest our neighbour Ken P. was called Kenneth, Ken R who lived next to the St Johns Church was called Ken and I being the youngest was called Kenny. The lagoon even had a jetty off the golf course level which gave better access to the deeper water for fishing. The aerial image indicates that the relict structure still exists, isolated in the middle of dry land. On another night time fishing trip with my Dad and Uncle Ted we had a fantastic view of the Skylab satellite which moved at relatively slow speed and because of its low proximity to earth was like a huge yellow ball. On yet another trip I found a bleached whale skeleton on the Pingo side of the lagoon. I ended up carrying one of the large vertebrae back home with some difficulty, for our feature garden next to the old toilet which included the ancient pottery and other interesting artifacts which had been collected.

Reference: From technical paper by L.M. Juckes titled “A bone-bearing beachrock at Umbogintwini Natal”.
The picture shows that all of the beach bar was removed in a major storm in 1966 which exposed bone fossils and archaeology artifacts.

The lagoon beach itself was a very popular place for young surfers and other ‘beach bums’ from Twini and Athlone Park. I can clearly remember Richard, Gavin, Andre, Bernard, Allan, two Marks, Steven and at least ten others near the beach rock face on many occasions. Coincidentally a number of those characters now live on Brisbane’s Sunshine Coast and on Bribie Island. Fishing for green shad with my Dad in the bay was also a big thing in winter. We would get to the bay before daybreak, bait up and start fishing, usually successfully. The only problem was that it was so cold that my fingers became numb and shrivelled. The only way to provide relief was to quickly bait up and cast out by standing in the waves which were quite warm compared with the beach. My brother Mark would also regularly catch crayfish off the rock shelf. It’s also a special place to my family as my Dad’s ashes were also spread beyond the bay in 1997. 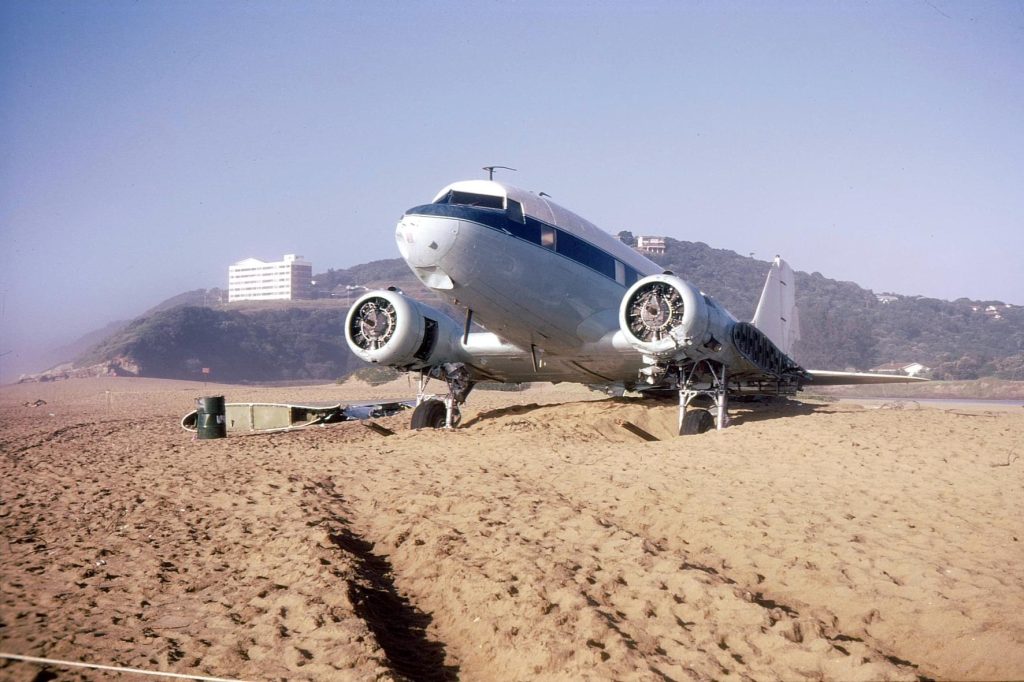 This is the same beach where the Dakota aeroplane ditched in the sea on 28 December 1973 after running out of fuel a short distance from the airport, on a trip back from a Lesotho casino. I was doing uni student work at the bottle store when the Dakota came in so low that we all ran outside to see what was happening and realising that the plane was in trouble, virtually gliding on its last breath to land in the breakers just outside the bay at Twini lagoon. Those that died jumped out of the plane which saved most of the remaining passengers and crew when it simply floated to the shore. The beach appears to have become informally known by some as Dakota Beach because of that incident. 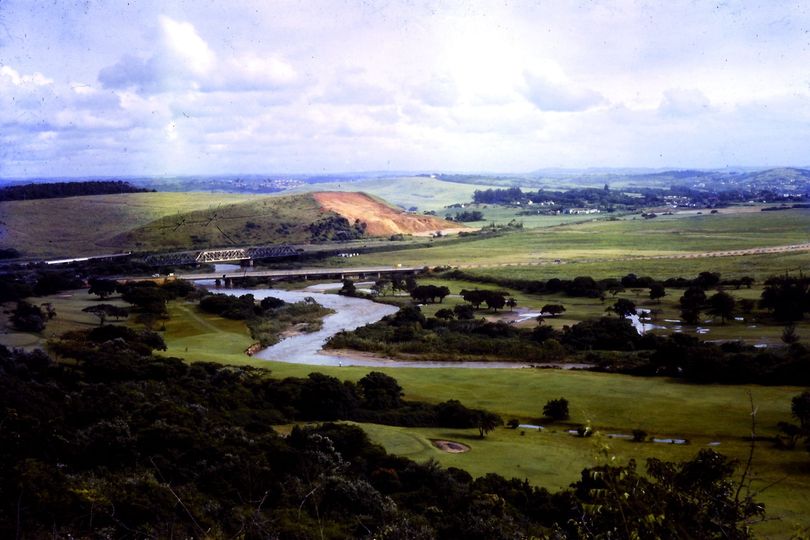 Roderick reminded me of adventures along the Twini River from the area of the African sports field where huge guavas could be picked. Areas of rapidly deposited sand resulted in quicksand situations where you found yourself instantly thigh high into the very loose sand  –  very frightening! There were also two old sand-filled circular brick-lined well points in that part of the river. There was however about two foot of internal water with overhanging grass which was great for catching small fish, eels and shrimps which hid in the grass edge. The grass also provided good nesting spots for wagtails, as well as the occasional water snake which would give you a huge fright when they darted out of the grass. Bilharzia was potentially always an issue, however I only heard of one case where children contracted the disease from playing in a fresh stockpile of sand obtained from the river.