Walking with my parents from home to Twini beach, not more than half an hour, was also one of the earliest memories. A narrow dirt track zigzagged down the steep slope through the coastal silverleaf trees down to the beach about 250 feet (80m) below, the start of the track being at the sharp corner in Ocean View Road, nearby which in later years also became the launch pad for hang gliders. This was a popular beach for the locals until the 60s, particularly at low tide when about 1 mile length of beach rock was exposed for a distance of up to 20 yards (18m) off the sand line. A deep pool had also been blown out by Kynochs during the early 1900s to provide a swimming pool for the village people. Many small natural pools in the rocks were like mini aquariums that provided refuge for dogfish and other species as well as live cowries, sea urchins and even small octopus. The rock edge was also a perfect spot for fishing at low tide. Scratching around in the sand and gravel in the small tidal pools frequently produced coins and on one occasion even a nice gold ring. Going down the track to the beach was however fraught with some danger including on one occasion when a night adder lay in a rutted-out section of the track which had to be quickly bypassed, as well as when a large green mamba, at eye level in the silverleaf trees just off the seaside edge of the track, on another occasion had to be got past. My Mom gave up walking to the beach after a while because of the steep walk back and because of her fear of snakes. I have many other good memories of that beach including catching many karanteen (good eating, with fried battered roe the best) and even following a lost small penguin along the wave line heading towards Durban. The penguin was many hundreds of kilometres from its normal range toward the Cape. Large deep turtle nest holes were also not an uncommon sight in the elevated parts of the beach. 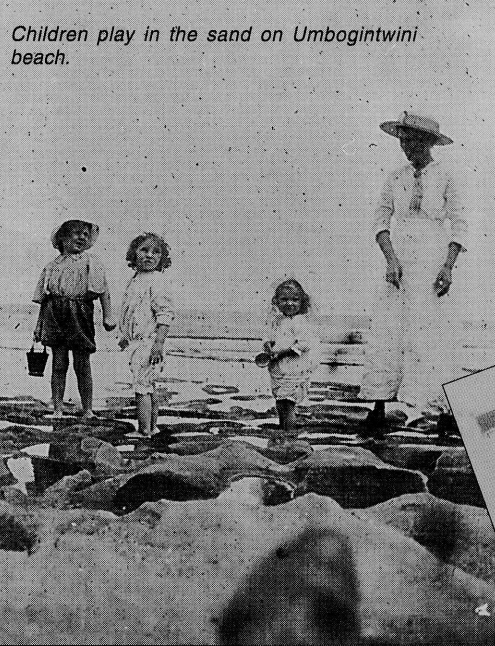