Mr Warner, interestingly a land surveyor from Brisbane, was contracted from Australia to lay out the factory and village. Mr Warner’s residence (after the house that had been built for him in Twini) was a farm in what we now know of as Warner Beach. Multiple generations of the Warner family to this day in Queensland have become land surveyors.

Twenty three men and their families from the Kynochs factory in Arklow, near Dublin in Ireland, moved to the area from 1908 to assist with the construction of the Twini factory with the men living outside of Twini until the first houses were built. Men from other parts of England were also amongst the earliest people to be employed at the factory. Some of the earliest families included Scorer, Weller and Hughes. Pioneer and later families included Kelly, O’Brien, Johnston, Roach and others. The split between the Republic of Ireland and North Ireland in 1922 had as yet not taken place. In May 1910, the first white child in Twini was born to Mr and Mrs Cutler.  Interestingly my recent detailed ‘Y’ DNA test results have revealed that my male line go back to ancient times in Ireland, i.e. around 6,000 – 7,000 years ago. This was a revelation as I know my great grandfather arrived in Durban in the 1870s. Prior to that the men in my Grubb line came from Macclesfield in England and prior to that Dublin in Ireland in the 1700s having all been in the silk weaving industry – see www.frederickwilliamgrubb.com.

Highbury Road, which was the first road for residential construction in the village, became the focus of the earliest amenities buildings and residences. Additional residences and amenity buildings were constructed as the village expanded with Chamberlain Road becoming the next road for development. The name ‘Highbury’ must have had some significance to those early Irish migrants as the other road names are connected to company executives or company managers. 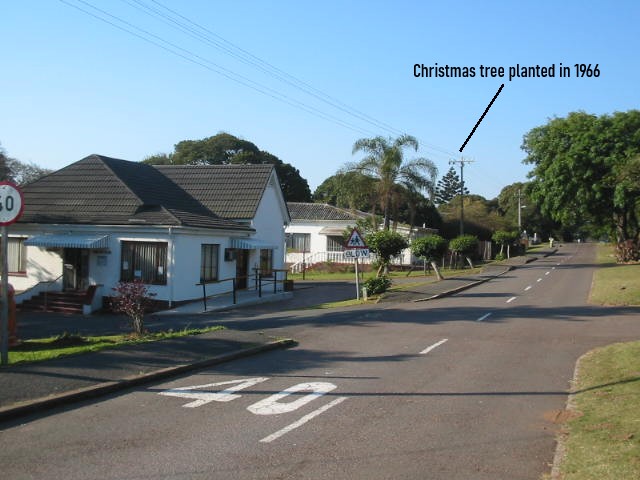 Highbury Road – looking north from near the Jubilee Hall, 2002.

Construction ranged from the early iron-clad on stumps type, to semi-detached single storey with underfloor ventilation, to more modern single storey slab on ground construction as well as double storey construction including for the Royal Navy houses and two small blocks of flats in Oppenheimer and Scully Roads. The “new village” as it was known around Udal Road was constructed in the late 50s and early 60s. Some new single storey houses in Highbury Road, constructed in the early 60s, comprised the more modern slab on ground construction. The double storey “staff” house, originally built for Mr Chamberlain, was subsequently modified for visiting personnel as well as for business lunches. The variable residential architecture, over about 55 years, represented the different eras and development phases of the factory.

African policemen, with their knobkerries, would regularly patrol the village to ensure that the ‘tsotsis’ and ‘skebengas’ did not cause problems.

The village appears to have essentially remained unchanged until December 2004 when 90 hectares comprising the village and golf course was sold to Keystone Investments for their Arbour Town Development. 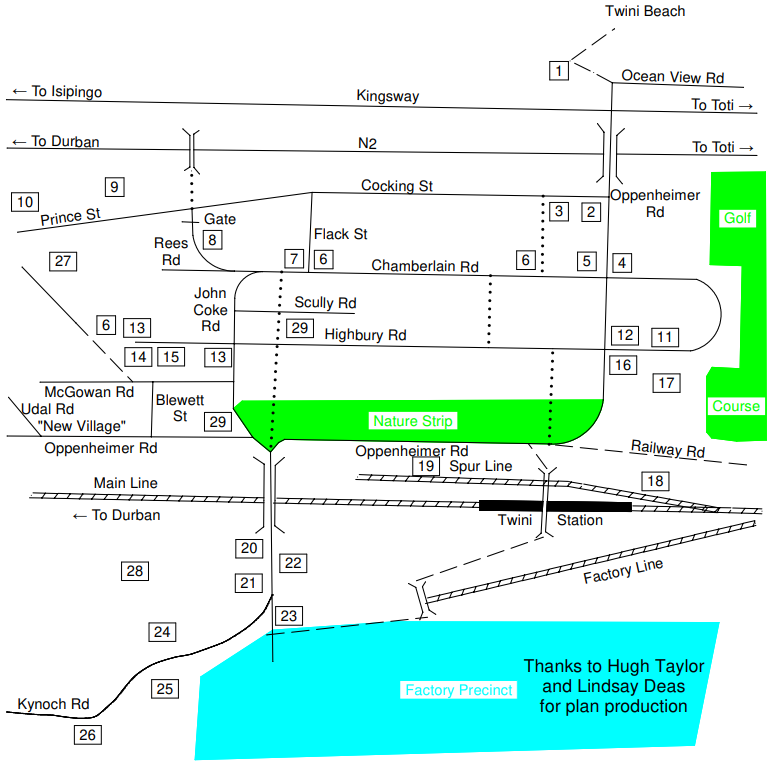 My sketch above shows much of the village layout and location of its structures as I recall these. The main road access to the village, before the construction of the N2 highway, was via Kingsway and Oppenheimer Road. Oppenheimer Road extended through the village and then via Kynoch Road across the old rail bridge to the time office being the main entry gate to the factory. Pardies service station, the second post office, Theos Supermarket, a butcher and bottle store were located along Oppenheimer Road between Cocking Road and Chamberlain Road. Mr Suddards and then Mr Green were the proprietors of Theo’s Supermarket in my time. St Johns Church was located near the corner of Oppenheimer and Chamberlain Roads with the Jubilee Hall and war memorial being located on the south side of the intersection of Oppenheimer and Highbury Road. The entry to the railway station was (and still is) a short distance further along. After crossing the old railway bridge into Kynoch Road and towards the time office there was the original post office and main electricity substation on the north (right hand) side and Bjorseths original trading store (subsequent distribution centre) on the left. The trading store was subsequently relocated to Prince Street. I still have great memories of the African section of the store, with its strong smell of spices, its Indian salespeople and old Mr Bjorseth (Eddie’s father) who sat near the counter talking to all the customers who came in. I clearly remember meeting John G. in that part of the store in about 1965 when going to buy rubber bands for my new catapult. I was amazed to find out that John, of similar age to me, had flown back from an overseas school to be with his parents for the school holidays. Anyway a weatherboard residence on stumps was also located behind the original post office along the track that followed the railway towards Durban where the dairy was located. This was the only residence located across the railway from the village. Napier fodder (a very tall sugarcane-like cattle feed grass) also occupied the old dairy grounds, the napier fodder being regularly used by coucals to make their round ball-like nests about 5 foot off the ground. The time office prevented public access into the factory grounds however Kynoch Road continued onwards past the sports field on the right and the hospital on the left. Further along the road again was the Indian village on the left and further along and downhill was the sewerage works near the head of the steep sided poorly drained valley on the right which we called the “swamp”. The road then continued downhill to the African sports field and the road bridge over the Twini River. Beyond the bridge, and all through the floodplain to later Prospecton, were sugar cane fields with the Orient club on a hill north of the bridge.

A very steep high bare clay bank on the river side of the Orient Club was the location of many birds nest holes including European rollers, bee-eaters and sand martins. Sakabulas (long tailed widow bird) were a common sight in the cane fields and I even found a black-backed Sisticola nest, with eggs, in the cane stubble close to the ground. Their beautiful uniform glossy brick red eggs are possibly the only birds in the world with red eggs.  A hilly area between the bridge and Orient Club (western side) also became a motorbike scramble track which drew crowds from miles around at the weekend. The annual burn-off of the sugarcane leaves resulted in large black smoke clouds and lots of ash at our place when the north easterly winds were blowing. That pollution differed a lot from the white powder that ended up on our verandah at regular intervals when the land breeze was blowing. Our veranda had to be regularly swept and polished as a result. More than 100 youngsters of various age groups and eras lived in and around Highbury Road in my time so there were always a lot of social interactions, perhaps a lot more written memories could follow mine? The Whitely family were one of the families who lived in our road. Mr Jimmy Whitely had a ‘skiffle band’ and they set up a session one night in a garage across the road from our place when the Bakers lived there. The Whiteleys were however more well known for the father, mother and four girls all having names that started with the letter ‘J’. Another lad by the nickname of “Eggy” who lived in the same house after the Whiteleys left, got a lot of attention when his Dad flew back to England in the mid-60s with S.A.A. in a Boeing 707, such were the developments in flying when the average person could travel quickly in style and not have to catch the mail boats.