The area of Twini has been inhabited since the early stone age i.e. more than 250,000 years ago. Natal pre-European habitation has extended through the stone age to the iron age up to 1824 AD with the inland Duma San ‘bushmen’, and coastal Khoi hunter gather ‘strandlopers’, being present for thousands of years. The ancestors of the Zulus, i.e. the Nguni-speaking agro-pastoralists apparently arrived in the area about 800 – 1000 years ago. Bartholomeu Dias sailed around the tip of Africa in the 1480s, Vasco de Gama landed on the Natal coast in 1497, Jan van Riebeeck established a permanent Dutch settlement at Cape Town in 1652 and in 1824 the proper settlement of Durban, 23 km to the north east of Twini, commenced.

The book titled “Southern Land” by A.R. Willcox gives good coverage of South African life from millions of years ago, through the cultures in the stone and iron ages, and then up to coastal voyages around parts of African from as early as 600 BC with other voyages and human movement into European settlement times. 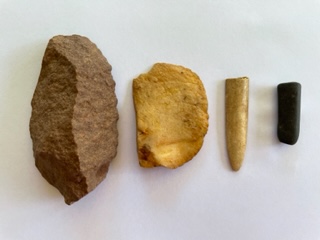 My own contact  with the ancient history of Twini came to the fore in the mid-1960s as a teenager when electrification of the railways involved the removal of the original road bridge to the factory and excavating downwards about 10 – 15m from original ground level to form the banks mainly on the western side.  I would scramble across the bright red exposed sandbank to collect a large range of artifacts including a stone grinder, stone axes, a lovely quartzite scraper that fitted perfectly into the palm of my hand, as well as plenty of clay pottery. No matter how hard that I collected I was never able to form a complete pot when sticking the pieces together. Drilled ostrich shell  small discs and even irregular shaped glass beads for necklaces or similar were found in the upper levels with the full zone comprising about 5m to 10m down from about 2m below ground level. The burnt out vertical charcoal ‘posts’ of a kraal were also exposed in the bank. I presumed that my deepest finds were of middle to late stone age, i.e. between 25,000 and 180,000 years of age. The glass beads in the upper levels probably went back to the 1700s or 1800s. There was no slag (left over from the production of iron) at that location however a large amount of slag became exposed close to the surface when the sports field, near the later Dickens Road bridge crossing of the railway line, was excavated. That near surface location was probably a late iron age production facility, probably of 1600 to 1800 AD vintage. Excavations for the ‘Surfview’ units above the beach at “Windy Corner” in Athlone Park in the late 60s also exposed extensive shell middens with a range of implements including a small cylindrical indurated shale implement (possible snuff grinder) and a broken bone implement about 100mm long resembling a knife blade and believed to be for prizing flesh out of opened shellfish