I lived at 12 Highbury Road with my parents and two brothers and my sister Jenny who was born at the Twini hospital, the rest of us having been born in Durban. In the early 1970s the street numbering was changed for some reason when our house was renumbered 18.  This is the place where the Farringtons also lived for 20 years. 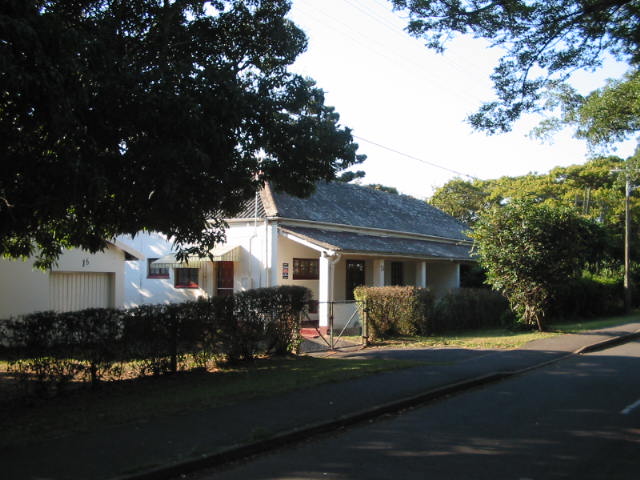 Our house was one of the first houses completed around 1910. Our house was very centrally located to most facilities being within 10 minutes or less walk of Pardie’s service station, Theo’s store, the bottle shop and butcher, both the old and new post offices, the Jubilee Hall, tennis courts, swimming pool, squash courts, library, club house, golf course, Bjorseth trading store, railway station, sports field and hospital. The Catholic, Anglican and Presbyterian Churches were also within close proximity. An Indian ‘sammy’ with a basket at either end of a sliced bamboo trunk slung over his shoulders would regularly walk around the village selling fresh produce. By the mid-60s however he had made enough money to do his rounds with a Toyota ‘bakkie’. A very regal Indian fellow would also come around to do haircuts for the kids sitting on chairs in the garden. This service was later displaced by Johnny Johnson who after work had a barber’s room in the distribution office, i.e. original Bjorseth store near the time office. Chemist deliveries were made from Newman’s in Toti by an African bloke on his bicycle, which was also the mode of transport for the ice-cream man and many of the boys going to Kingsway High school at Doonside i.e. for those that didn’t want to catch the train. Incidentally boys’ high school education in my day included rifle practice at the school range close to the double storey classrooms, all under the watchful eye of Mr Brunner. Latin was also one of my semester subjects in standard six = year eight. One high school bloke by the name of Bert would head towards the station in the morning only to often detour into a large tree in the nature strip at the bottom of our garden. He would wait for both his parents, who worked at Kynochs, to drive over the railway bridge before heading back home across the road from our place, to catch up with his girlfriend and play Elvis music!  Mike and Len also reminded me of the local taxi service provided by Peter McNaught-Davis and his wife.

Anyway our house was a semi-detached three-bedroom rendered brick house with the floor positioned about 3 foot above the ground with some wide undercroft access openings for ventilation purposes. The roof over a 10 foot high ceiling comprised corrugated asbestos. A verandah, with double French type doors, fronted the road with two other entry/exit side doors to the garden via the kitchen and rear of the house. The kitchen originally had a separate pantry room which was subsequently demolished to produce a larger kitchen. The chain-activated toilet, or lavatory as we knew it, was originally a small outhouse contemporary room attached to the house. A new modern type toilet was constructed over the rear garden steps (which were extended) in the mid 60s to provide all weather enclosed access with the house.  The renovations and maintenance of our house, including regular painting every five years or so, was carried out by the company.

Our garden appeared to be huge but in reality it was probably a quarter or third acre lot, with a Cape Honeysuckle fence fronting the shorter boundary to the road, an Australian Myrtle (Lillypilly) fence down the full length of the northern boundary, a Bougainvillea fence down the full length of the southern boundary and a three strand wire fence at the lower end fronting the nature strip above Oppenheimer Road. The land sloped gently to the lower rear boundary before steepening up through the nature strip. Our very long serving housemaid, by the name of Vieena, had her kiah at the bottom left hand side of the garden. Our long term garden man was Gobess, who was replaced by Phineas when Gobess passed away, both travelling daily to our house for work during the weekdays.  We also had chicken runs, bird cages and greenhouses in our garden. My Dad started with the run of bird cages and then got into collecting gems and making jewellery. I still have part of the gem collection in a nice mahogany cabinet with the old ultraviolet light removed. My Dad and brother Clive were however mainly into flowers and orchids in later times. Breeding and selling tropical fish and doing student work at the bottle store paid my university fees.

We had a wonderful garden which had views out to the cooling towers at the old power station at Pinetown to the north, “table top” mountain beyond the large fertilizer shed in the factory to the west and we could also see the smoke from the steam engines over the trees for a long way towards Toti. Our garden included a large makushla tree (with big lucky beans) and a flat crown tree at the front gate, as well as two large mango trees and five very large avocado trees, as well as other native and exotic fruit trees including peach, guava, mulberry and macadamia nuts (which we always knew as Queensland nuts), also bananas, grenadillas (passionfruit) grapes etc. The avos were of two original varieties with elliptical or round fruit with the fruit regularly being over half a kilogram each. The avo variety currently sold in Queensland is not much larger than the size of the pip of our avos of old. The round avos, which we called “butter pears” were our favourites as the fruit was smooth like cheese or butter, whereas the elliptical pears tended to be a bit stringy. The excess round pears, similar in size to bowls, also had the benefit of being able to play bowls with, such were the wasteful conditions that we as kids never appreciated at the time. A high horizontal branch on one of our avo trees also provided good anchor points for our well–used swing. We gained a lot of interest from neighbours one season when a watermelon vine grew up our large mulberry tree with the result that full grown watermelons were hanging like large Christmas decoration balls up to 8 to 10 feet off the ground. Our mangoes were also in demand by the local Indian community, particularly the green ones which were either sliced and eaten with salt or used to make chutney. For a number of years we also had wild spinach growing around our lower fence line. An old Indian bloke used to collect the spinach in big hessian sacks and within a few days he would return with delicious large homemade samoosas with spinach filling. These were always gladly anticipated.

For good international reception my Dad stretched a thin copper wire from our solid state radio for about 30m through two of the avocado trees in the garden, so that we could get “Voice of America” and listen to the count-downs for the space launches from Cape Canaveral.

Guy Fawkes night on 5 November each year was excitedly anticipated at our place. My Uncle Ted would buy boxes of fireworks from his Chinese shop owner friends in Durban and bring these out to our place. Kids, and some adults, from the whole area would come around to take in the fun. We would have a great time with sparklers, squibs, big bangs, roman candles, spinners and rockets. The rockets, including on one occasion one with a clear plastic cylinder with a space man located at the top of the rocket, would be fired off to great heights. Extra fun was also had early the following day to see who could find the left over rocket sticks.

Other activities at different times at our place included raising silkworms to produce diamond and circle shaped bookmarks, making blow pipes, catapults (slingshots) and crossbows, whereas others were into major projects such as making ferro-concrete boats e.g. by Mike and his brother at the end of McGowan Road, where a huge hull was propped up next to their house. Blowpipes were made using different length curtain brass pipe with the darts simply being a pin with a piece of cotton wool for short pipes, or golf tees carefully trimmed for a perfect fit into the pipe with the front comprising a small nail as the point for the long pipes. The reach and accuracy of the long pipes would have made the Amazon Indians proud! Guava branch prongs were best for our catapults and the crossbows were very accurate for 20m or more.

My good friend John,  from Railway Road, and I had plenty of fun and adventures collecting wild orchids as far away as Shongweni waterfall as well as collecting all sorts of other things and breeding bantams and tropical fish etc. We even built in-ground fish ponds using bricks at both our places. Little did we realise at that time how aggressive cement was on our bare hands, that resulted in the skin on our hands peeling for days afterwards. To this day John has maintained an interest in plants, now having a magnificent bonsai collection of commercial scale. During some of the Christmas holidays we would travel overnight by train with his Mom and sister Su to stay with his relatives in Kroonstad or on his Uncle’s mealie farm named “Doornhoek” near Welkom. Amazingly as 15 year olds we even hitchhiked 300 km each way from Kroonstad to Kimberley to stay with another of John’s cousins and to visit the famous ‘big hole’ at Kimberley. July 20th 1969 also holds good memories when John and I sat on the steps outside my bedroom in the night looking at the moon in the vain hope of seeing a satellite land on or leave the moon during the first moon landing.  Walking to John’s house along Railway Road on hot summer afternoons was an eye opener. The fine grass clippings from the bowling greens above, which had been thrown over the red earth bank along the edge of the road, would start smouldering and smoking without any human assistance. It was only years later that I heard the expression ‘spontaneous combustion’ where the sun’s heat alone triggered the burning. That section of bank was the same place where I dug out small clusters of muscovite mica, i.e. a transparent flaky mineral used for insulation purposes.

Macoyas, i.e. wild mushrooms, would pop up magically under the thorn trees in the nature strip below our garden, during and after thunderstorms. These mushrooms, to the size of saucers, would come out of nowhere in an hour or so. There would always be a mad rush to be the first to get to the mushrooms as all the locals would also be on the look out. Anyway the sliced pieces fried in butter generated a smell like steak and a delicious taste.

In 1966 I planted our Christmas tree (Norfolk Pine) that had become too big for our house. On my last visit to Twini in 2002 the tree soared far above the other trees as shown in my earlier photograph. This tree would have been an easy location marker for my place in the event that the house and surrounds had not been demolished.  Our Christmas tree would have reached the height of the five large Norfolk Pines that were located in Highbury Road, past the intersection with John Coke Road. Neil from Highbury Road reminded me of the lovely blue-headed lizards which frequented those trees.