Mr Oppenheimer, Harry as he liked to be known, officiated at the opening of the Jubilee Hall in 1958 which I attended with my Dad. As a kid I didn’t realize how important a figure he was in the world as Anglo American for which the AE & CI factory at Twini was a subsidiary, and De Beers were intimately tied up with his family. In simple terms the main gold and diamond supply of the world was tied up with his family. The main excitement for me however was the same night at the sports field when an epic fireworks display was put on. This included metal frameworks constructed such that a goose would walk along, lay an egg and the egg would hatch with the baby following its mother until the light frame fireworks ran out. In another scene two battleships fired at each other until one of the ships caught fire at the end of the scene.

The Jubilee Hall was more of the social centre of the village than the clubhouse. The Jubilee Hall replaced a small wooden building on stumps that was located behind the war memorial. Susan Baker, from across the road, would taken me at about 4 years of age to attend Sunday School there. The Jubilee Hall had the entrance with outside facing ticket office and opposite steps up to the projection room fronting Oppenheimer Road with glass French type doors for opening fronting the full length of the western side verandah. A small room off the verandah was the original library before it moved to the old house past the tennis courts and later swimming pool. The stage and undercroft storage was located at the far southern end. The Dam Busters of WWII bouncing bomb fame and Operation Noah are two of many movies held at the hall which I can still clearly remember today. Operation Noah came about after the construction of Lake Kariba, the largest man-made lake in the world at the time, on the border between Southern and Northern Rhodesia i.e. Zimbabwe and Zambia. The filling of the lake resulted in a huge number of wildlife being rescued and relocated. The hall was also used for multiple other purposes including Womens Institute meetings, flower shows, company Christmas parties for the employees’ kids, badminton, as well as being leased out for other functions including discos, Twini Primary School prizegivings and weddings. At one Christmas party we even had a live local band, called ‘Peter and the Dolphins’ as I recall, keeping us entertained with the “Four Jacks and a Jill” entertaining patrons on another occasion. I became a regular badminton player, with many others including Johann from down the road with his incredible backhand smash and Mr Ron Sparkes training the juniors and managing the seniors. Tricia and I also had our wedding reception at the hall with all catering organised by the Womens Institute with the always energetic Mrs Flora Rice at the helm. Jubilee Hall was also a major stop for the school bus to and from Kingsway High School. Joy from Highbury Road reminded me of how they would run down the road to get milk from the milkman who parked his cart outside the Jubilee Hall. 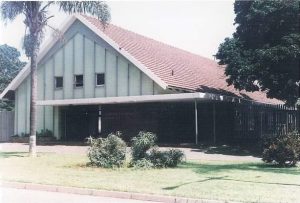 The following extract in ‘A History of Amanzimtoti’ is from the 27 October 1966 edition of the Tom Tom: “The Umbogintwini Dramatic Society is presenting ‘Something to Hide’ by Leslie Sands, produced by Bertha McSkimming in the Jubilee Hall Umbogintwini on November 17, 18 and 19. The cast includes Polly Summerville, Robert McMillan, Bob Schuter, Elinor Railton, Enid Hedgcock, Jennifer Schuter and Basil Hedgcock.” Separate articles on the same page discuss the Umbogintwini and District Caledonian Society meeting, also that Mrs Strangman of Umbogintwini won a portable radio in the Kingsway Old Pupils Club cricket meeting and that S. Bjorseth of Umbogintwini was a M.O.T.H. Cinema prize winner.