We had a vast array of birds in our garden and around the village. Paradise fly-catchers, barbets, sunbirds, weavers, yellow-eyed canaries, drongos, woodpeckers, Narina Trogons and the list goes on. Because we had bird cages all the locals would bring injured or orphaned birds for us to look after. One orphan was a baby African Hoopoe that I fed until it was able to walk. I then had the task of working out how to teach it to feed, knowing that these birds would walk along the ground and probe their long beaks into the soil to catch worms. Anyway I got it to follow me, with the bird walking on the ground and me pushing my index finger into the sand. Much to my excitement I found that the Hoopoe copied me and in no time was able to distinguish whether there were one or two worms in the hole, going back for a second grab when appropriate. The Hoopoe stayed in my room and would fly in and out through the window for about two weeks before it decided that it was time to go permanently.

Piet our pied crow was another example of an injured bird brought to our house. He was found with a broken wing on the side of a road somewhere, so my dad made a lovely cage out of a large cable drum placed about 5 foot off the ground on a steel pole. Some of the outer cylinder planks made a door, other outer planks were removed and replaced with bird wire with some of the inner cylinder planks removed for a night time sleeping place. Piet stayed with us from 1962 to 1975 in Twini then moved with us until 1978 in Toti before some other good person took him off our hands when we moved again. The cable drums in various forms also came in very handy for other uses. Some of the cable drums had metal internal cylinders rather than wood slats. Anyway my Dad made a great six foot diameter garden table under one of the avocado trees by removing the outer perimeter wood slats and one of the wooden ‘wheels’ and then burying the metal inner cylinder vertically into the ground with the remaining wooden ‘wheel’ as the table top.

Catching birds was a regular pastime, whether it was by walk-in traps with pull strings or caller traps, using bird lime (a sticky bubble gum-like substance made from mistletoe berries) or even spraying with a hosepipe, usually for escaped budgies. Green twinspots, lavender finches and swee waxbills were the main interest although rooibekkies and others were trapped as far away as in the sugar cane fields. The birds were either swapped or sold to blokes that came from as far away as Jo’burg. 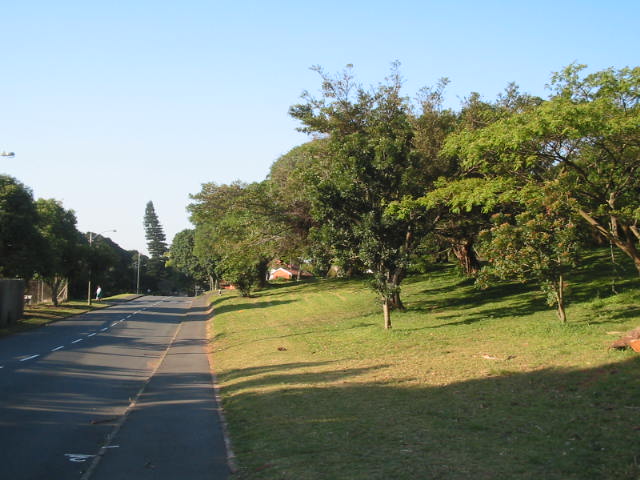 Oppenheimer Road and nature strip near the entry to the station, 2002

Twini was alive with snakes. Mr. Blewett, who was factory manager from 1922 to 1928 and is mentioned in the 100 year South Coast Sun article, stated “since I first worked at Umbogintwini I have tramped many miles in all parts of Africa, but no other place I know has had anything like as many snakes as that area on which the factory was built”. The same applied in my time with red-lipped heralds and house snakes being the most common, but green and black mambas, boomslangs, night adders, egg eaters, sand snakes, Natal black snakes, cobras and others being everywhere. Our neighbour Ken P. got me started with catching snakes. On one occasion Ken came over to our place with a black snake around his neck like a necklace, which we kids naturally also took turns at doing. It was only after Ken went to the snake park on Durban Beach that Mr Fitzsimons let him know that his ‘pet’ was a Natal black snake and apparently one of the most poisonous snakes in the province. The water meters in the road were the best place for catching snakes as the finger hole permitted the snakes to enter the buried pit box and either catch frogs or to rest for the day or night. On one occasion Mr Wise, from 20 (subsequently 26) Highbury Road, sent his garden boy up to our place for me to come and help with a snake that they had found in their large paper bag with chicken food. For the one and only time in all my snake catching time, my Dad instinctively decided to also go down (with our trusty Gecado 27 air rifle) to see what was going on. The bag had been placed in the middle of the lawn and the scrunched up top had partially opened. Nothing could be seen until my Dad approached the bag, and when about 10 feet away, the flared head of a Rinkals cobra came momentarily out of the top of the bag and spat venom across my Dad’s right cheek  –  the snake having aimed purely on the basis of vibrations from his feet moving across the ground towards the bag. Needless to say that bag was peppered with lead pellets from a distance and the dead 4 foot cobra was eventually retrieved. The big issue here is that my Dad and I could have been permanently blinded in one or both eyes due to the toxicity of the venom.

Three types of bats were seen. The most common were the small insect-eating bats which would sleep in the newest vertical cylindrical banana leaves during the day. We would catch them by placing a clean jam jar over the opening at the top of the new banana leaf then squeeze the bottom of the leaf progressively upwards until the bat ended up in the bottle. We were always extremely careful not to get bitten as we had been warned that they could carry rabies. A large white-winged bat variety was often found in our large avo trees. These solitary bats would constantly move around the tree trunk to hide from you. On one occasion we had a bunch of bananas ripening on the verandah which when ‘approached’ on the inside of the door window would find a very large fruit bat (similar to the flying foxes in Australia) hanging on the bananas and baring its teeth at us. Needless to say bananas were never placed there again. 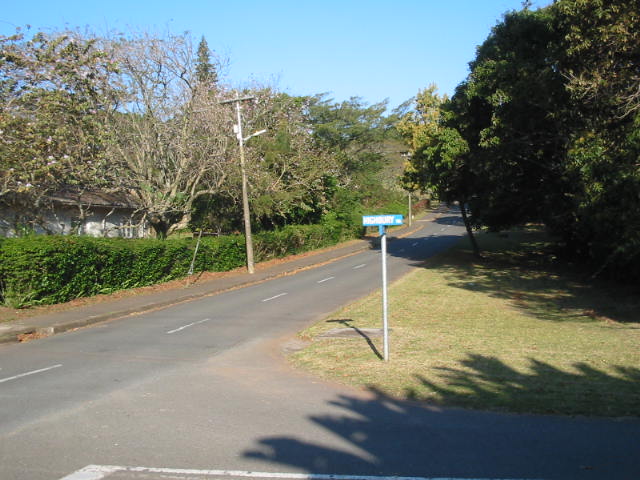 Looking south along Highbury Road from near the corner with John Cope Road, 2002

Moles with their soil mounds were everywhere. These near blind, rat-like creatures had a shiny silver grey coat. Some people had an intense dislike for the moles as their mounds spoiled the look of the lawns. Moles were easily caught simply by staying dead still until they started pumping up the soil and then quickly digging below the mound with a spade. The only problem was that the underground tunnels contained families of moles so catching them one at a time was a hopeless exercise.

The termites, or white ants as we called them, were quite large and would come flying out in their thousands in the evening after summer rains. Timber (non-treated in those days) left on the ground would seldom last more than a week or two. The termites would even get up off the ground into timber stockpiles, although I did notice that they made no impact on some heavy strong Australian jarrah that I recall being left overs of some railway sleepers. Anyway the veranda was usually covered in masses of large termite wings the night after these were shed. The termites did however provide a great source of food for many of our birds as well as for the small round milky skin toads that would pop out of the sandy soil in the night to have a feast.

A lot of interest was generated in 1930 when Huberto the female hippo moved along the Natal coast from the St Lucia estuary in Zulu Land to end up in East London in March 1931 where unfortunately she was shot dead.  Her stuffed body is in the museum at King Williams Town.